1508, this is the year Leonardo da Vinci thinks up and draws out the very first idea of what we know as a contact lens. In his experiments he filled a bowl with water, then placed a man’s face into it.  It is said that for the first time the individual was able to see clearly. Leonardo da Vinci also made a contact lense with a funnel on one side so that water could be poured into it. Although this was immediately discarded due to impracticality and the time in which he lived.

From here it seemed no one else really thought about his work on contacts, that is until 1887 when the first contact was manufactured from glass, and fitted to cover the entire eye. This is known as hard lenses. This design was used for some time.

It wasn’t until 1939 that the plastic lens was invented and as amazing as this step forward was they were still hard scleral lenses and this made them extremely uncomfortable.

However it wouldn’t take nearly as long to make new advancements as the last time. In 1948 they updated the lens to only cover the surface of the cornea. 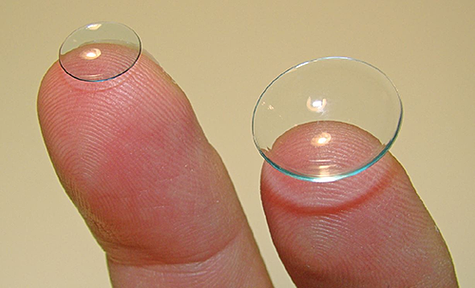 These were a great improvement but they still hard lenses that shaped the eye versus conforming to it.

1971 this is the year the FDA finally approved the use of softlenses in the US, however the original breakthrough in soft lenses was made by Czech chemists Otto Wichterle and Drahoslav Lím, who published their work Hydrophilic Gels for Biological Use in the journal “Nature” in 1959,  in 1965 The National Patent Corporation bought the American rights to produce the lenses and then sub-licensed the rights to Bausch & Lomb, which started to manufacture them in the United States, while other countries had been using the softlenses as early as the 60’s.

These soft lenses were soon prescribed more often than rigid ones, mostly because of the much greater comfort (rigid lenses require a period of adaptation before full comfort is achieved). In 1972, British optometrist Rishi Agarwal was the first to suggest disposable soft contact lenses. The polymers from which soft lenses are manufactured improved over the next 25 years, primarily in the fact that they allowed much more oxygen, by varying the ingredients.

In 1986 overnight lenses were introduced, from there the introductions of the disposable soft lens came and as the material and know how was improved the one-day disposable lenses came out. The “soflens” was created by Ron Hamilton in Scotland, his company was later bought by Bausch & Lomb.

As the 1 day daily lenses became more popular they continued to improve on the designs, we are now given dailies ranging from Coopervisions’ Freshday/ Clariti- 1, to Alcons Dailies total one and Dailies Aqua Comfort Plus. The use of the dailies greatly decreases the need for upkeep, t0he need to pay close attention to cycle, and the possibility of infections or ulcers.  As with all contacts choosing to go daily or monthly is up to both patient and Doctor.

You can schedule your next eye exam with us online!